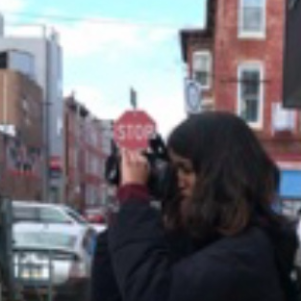 A South Asian Family Drama in the Suburbs of Pittsburgh: An Inside Look at Sujata Day’s Directorial Debut

South Asian Americans make up a large percentage of spelling bee winners, and Monica Chowdhury became one of them after she won the 2005 Scribbs National Spelling Bee. Fast forward fifteen years later, as former spelling bee winners work at NASA and build start-ups, Monica is living with her mother in her hometown and coaching the next generation of spelling bee champions. Sujata Day’s directorial debut, Definition Please, explores the taboos of mental health and how this shapes one Asian American family’s relationship to one another.

In this interview with PAAFF, Writer/Producer/Director Sujata Day discusses her debut feature film and the significance of presenting serious topics through light-hearted humor.

Your debut feature film takes issues that are taboo in the South Asian community and puts them at the center of an Indian American family’s everyday life. Tell me about your vision for the film. When did you realize it?

Sujata Day: It started in fourth grade when I won my class spelling bee. Then, I went to regionals and lost in the first round on the word “radish.” I spelled it with two d’s instead of one. Since then, I have watched the national spelling bees on ESPN and noticed that most of the winners were South Asian American kids. In 2015, I was in a UCB sketch writing class and wrote a sketch called “Where Are They Now?: Spelling Bee Champions.” Most spelling bee winners are working at NASA, winning poker tournaments, and they’re probably even working on the COVID vaccine right now. The button of my sketch was that one of these champs turned out to be a loser. A couple of years later, in 2017, I started writing Definition Please, loosely based on this comedy sketch premise.

Are there characters or scenes in the film that you deeply resonate or connect with?

Sujata Day: Some of my favorite scenes are with Anna Khaja, who plays Jaya in the film. They provide a welcome break from the tense scenes with Ritesh Rajan, who plays Sonny. I loved the quiet scene in the bedroom between Monica and Jaya. You really get a sense of how close their relationship is. The treehouse scene between mother and daughter was also really touching and fun to shoot.

We see humorous moments amidst serious scenes. We see it when the main character, Monica, is checking out the doctor while her mom is in the hospital. We see it when older brother Sonny embarrassingly chases his sister’s romantic interest away. Why was it important for you to tell this story with lightheartedness and humor?

Sujata Day: Real life is full of drama mixed with comedy and Definition Please is the Chowdry family’s slice of life. As human beings, we experience a roller coaster of emotions all in the same day. I came from a grounded, authentic place in constructing this story and stayed true to how each character would react in whatever situation they happen to find themselves in.

In several scenes, we see men through Monica’s gaze. Hollywood Reporter’s Beandrea July wrote in their film review, “these seemingly random camera pans are usually reserved for scantily clad women in mainstream Bollywood movies, but here… it’s the men who are served up as fine cuts of meat”. Tell me about the significance of showing men through a South Asian woman’s gaze.

Sujata Day: All of my work is told through a South Asian woman’s gaze. In Bollywood films, there’s a specific trope called the “item number” in which a stunning woman, with no connection to the plot whatsoever, performs a sexy dance for a room full of boisterous, drunk men. I wanted to flip the script and subvert stereotypes. I think it’s important to note that all the good-looking guys in Definition Please happen to be Asian American or men of color, and that’s not by accident.

Sonny faces a mental health illness that significantly affects his relationship with his family. In a community that stigmatizes men’s mental health, what significance does his character hold? What was it like writing and developing such a character?

Sujata Day: In Asian American culture, mental illness is seen as a weakness, especially in men. In Definition Please, I strove to portray a real person dealing with his mental illness and the reactions of his loved ones. I pulled from multiple personal experiences to write and develop Sonny’s character. Through many rewrites and with the help of friends who gave notes on my script drafts, I made sure to make Sonny a fully-formed person, outside of his mental illness. Ritesh comes from a family of many doctors and did his own research on the role. He brought a lot to the character on his own. We collaborated and came to a mutual understanding of the way he would play the role, especially with all of Sonny’s highs and lows.

What are some challenges you faced while simultaneously directing and acting in this film?

Sujata Day: Raising money was the biggest challenge. As the writer/producer/director/star of the film, balancing the multiple creative roles of the process was easy because I was working on something I really believed in. I gathered the most talented crew and cast to pull it off. Convincing people to believe in me monetarily was a whole other story. It was emotionally exhausting, but honestly I let any potential investors know I was going to find a way to make this film, with or without their help. Luckily, in the end, we ended up with passionate investors who trusted and allowed our creative team to flourish, with very little artistic interference and a whole lot of financial support.

What do you want the audience to take away from this film?

Sujata Day: I made an American film that happens to have a South Asian American lead cast. I want to inspire others to feel empowered to tell their own specific stories because I was inspired by folks who created before me. All of our authentic stories are important, so let’s tackle every genre, whether it’s horror, or rom-com, or children’s television. I hope all audiences can connect to something in the story, whatever that happens to be. Maybe it’s trying to find yourself at a confusing period in your life or the feeling of being stuck in a small town due to familial obligations. I’d love for the audience to feel comfortable starting a conversation among their friends and family about mental illness.

What do you think it will take for marginalized communities to have agency over their stories? Tell me about your hopes or vision for Asian American films in the mainstream.

Sujata Day: We’re moving away from stereotypical, one-note characters written by non-South Asians to fully developed, realized characters written by South Asians. People with power in the industry are calling out inaccurate POV’s and recognizing their own complicit behavior in greenlighting or playing offensive material and roles. However, there’s still a lot more work to be done. A couple of years ago, I was close to getting a recurring role in a long-running, very successful sitcom. Right after the callback, I got a call from my agent saying that casting was asking if I was 100% Indian. The answer is yes, but I was floored that white casting directors were questioning my Indian-ness. That specific experience really kicked up my gears to produce my own project.

Sujata Day: I’ve been busy during quarantine; I wrote a pilot script and also my second feature. As soon as it’s safe, I’d like to go into production on both. All my scripts center around South Asian American girls/women, so I’m just going to keep doing what I’m doing. I also have another show in development at a major studio and we just attached an amazing South Asian American women director. All those pieces are coming together nicely. I’m excited to tackle both television and film at the same time.

Watch the Q&A here, on 11/15 at 1:30pm EST over livestream with Director Sujata Day and cast members Ritesh Rajan and Anna Khaja.